In the coming months I will be buying a new property, and to go with my new home, I’ve been reading up lots on how I might integrate a new home media setup.  In recent months several exciting new options have become available, which finally makes the sort of setup I have always desired a real possibility.

Currently, I have 1 HTPC which lives under the lounge TV and contains a BlackGold twin freeview-HD tuner.  Upstairs in the attic I have a Windows Server 2008 R2 server which contains a RAID card and approx 8Tb of storage.  The HTPC is responsible for recording TV, whilst the server contains various media and document libraries.  The server runs 24.7, wheras the HTPC sleeps unless we are watching or recording TV.  We also have a bedroom TV with built-in freeview which isn’t connected to the media-network.

Whilst this system is fine, and has served me well for a number of years, I would like to find ways to also do the following

My server already has multiple roles, including web and FTP servers as well as metadata management and automated downloading of various media (e.g. podcasts).  It runs windows, and many of the apps I run on it are windows only.  I can easily put the TV cards I have in it, but Media Center isn’t available on Windows Server 2008.  Due to the server roles I use it for, I don’t want to replace Server 2008 R2 with Windows 7 (which does include Media Center) so a solution which provides TV recording without Media Centrer would be ideal.  This would also address the problem of recorded files being in WTV format, which isn’t very compatible with other devices or platforms.  The second issue I have is that I would like to operate a software-based raid-like storage system which is much more flexible and expandable than hardware-raid.  The best solution for this is UnRAID, but sadly this is a standalone solution, and wont run under Windows (without messy things like virtual machines which are too risky for the importance of my data).

The first possibility I have identified for my storage needs is FlexRAID.  This is an UnRAID like system which runs on top of Windows.  It is still currently in development, and various parts are either alpha or beta, but it appears to offer all the features I want, and is being actively developed and supported.  I will be playing around with it in the upcoming weeks.

The solution to the remaining issues is (hopefully) all in 1.  DVBLogic’s DVBLink Connect Server provides a centralised server recording system which shares TV cards via network to Media Center, Android, Boxee, DLNA devices and more.  It enables pooled-recording for Media Center, watching TV on mobile devices (Windows Phone 7, Android, IOS), and remote management of recordings via web or mobile.  It will run on the server which can contain TV cards, and store recorded TV along with all other media.  Unsurprisingly it isn’t free, but given the feature list (and maturity) the price of €21 is very reasonable! 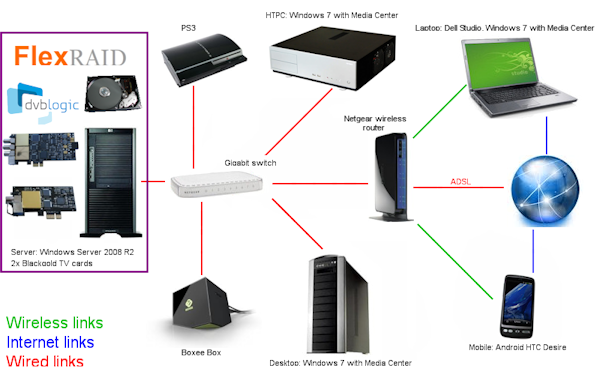 Think we’ve missed something? Let us know by commenting below. If you would like to subscribe please use the subscribe link on the menu at the top right. You can also share this with your friends by using the social links below. Cheers.