I have a very strange issue which is causing problems playing videos over a wireless-n network. Playing the videos causes the network to drop out after a short period. Sometimes this only lasts for 2-3 secondi, which just causes a video stutter. Other times the drop out is more permanent and takes nearly a minute to recover, a meno che la radio wireless è spento e riacceso, dopo di che si verifica la riconnessione.

I have so far tested and established the following facts (appunto: tutte le velocità sono espressi in bit non byte)… 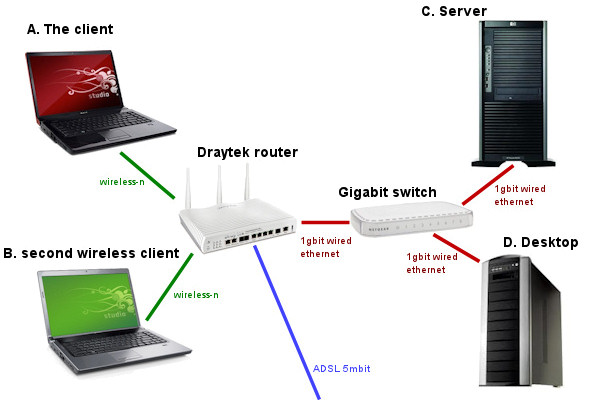 3. 2 Videos with a total of 4Mbps do suffer. Videos up to and including 13Mbps all exhibit the same issue. Higher rates haven’t been tested but I expect them to have the same problem.
4. There are no other nearby wireless networks effecting network performance,
5. Increasing the buffer in WMP a 30 seconds has no benefit. Furthermore the judders in video playback still occur at the same time as the ping timeouts so the buffer doesn’t even seem to be working?
6. The router firmware is up-to-date, and it has had the wireless board replaced without resolving the problem. The issue also occurred with older firmware.
7. The drivers for the wireless cards are up to date. Il problema si è verificato anche lo stesso con i vecchi driver.
8. When the connection cuts off it cuts off ALL wireless clients, even those not involved in the streaming so the issue *seems* likely to be at the router end of the connection, not the client end? (i.e. when streaming from C to A, B is also cut off temporarily)

http://forums.whirlpool.net.au/archive/1300843 – Some people saying its Intel cards, but others saying changing card didn’t help. Nothing conclusive.

http://forums.lenovo.com/t5/W-Series-ThinkPad-Laptops/INTEL-5100-5300-Network-Dropouts-Disconnects/m-p/97708 – Another speculating about Intel drivers, but still with an unresolved issue, quindi non molto disponibile

I’ve tested the laptop connected to 2 more wireless-n networks. Funziona senza alcun problema. In conclusion there is either a fault with the draytek or there is an incompatibility. Having already sent the draytek back once before I am rather disappointed that draytek failed to resolve the issue.