I’ve been having some stability issues with my HTPC 最近. A reinstall didn’t help so I concluded it was hardware. Removing all non essentials didn’t help either so I figured it must be CPU, 内存或主板相关. Nothing is overclocked or tweaked and its all fairly recent brand name kit. 我压力测试的 CPU and memory without causing either to fail, but I continued to get occasional lockups and intermittent sluggish performance.

Now because this is a htpc, it is in a smallish case with low airflow. It has 2 120mm fans but they’re controlled based on CPU temp and are usually off due to low CPU usage combined with the huge Scythe Ninja heatsink. I knew the CPU wasn’t overheating but thought i’d check the gpu (A passive Radeon 5450) and hdd, which is in a suspension mounting which reduces the cooling it receives.

However both hdd and gpu were barely lukewarm. In the process I happened to catch my hand on the fairly substantial chipset heatsink (labelled “gigabyte” in the photo below). 哎哟! I hadn’t realised that even with the substantial cooler the chipset required or expected some active cooling from the nearby CPU 插座. I don’t have a fan directly on the CPU 散热器 (你可以看到下面的) and the airflow over the chipset clearly wasn’t sufficient. Originally I had the fans arranged blowing air out of the case, but decided to try a small rearrangement – reversing them and fractionally increasing their minimum speed. Positive case pressure is generally good practice 无论如何, and this way air is forced past the heatsink to exit the case. 这个小变化似乎已经做的伎俩.
这个故事的寓意: 最近的一些(ISH) chipsets (e.g. 英特尔系列 4 chipsets) require reasonable airflow (or a heatsink upgrade – e.g. the Thermalright HR-05 which is now on my shopping list). It may also be a good idea to upgrade the thermal goop supplied with a high quality compound. 我建议 集成电路 7 Diamond if you can’t.
最后一点 – in my case the companion southbridge, with a tiny “散热器”, (center bottom of image) 只是中等热情显然不需要任何改变. 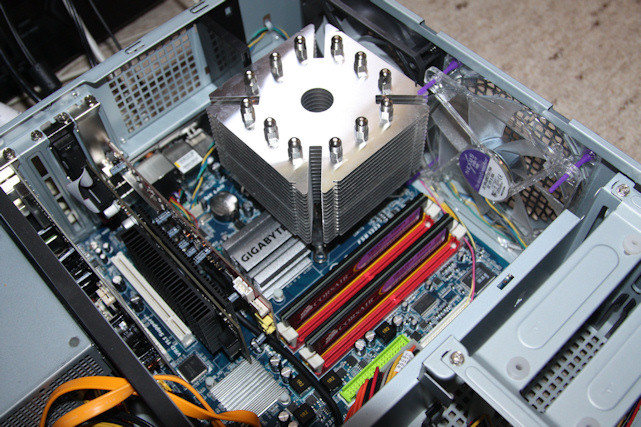