I have previously written about modifying cheap £10 smartplugs to run open source firmware. Now I have quite a number of them I needed an efficient way to update them. In this article I document how to do

I have a range of Smart Plugs but they’re all based on the ESP8266 chip and all have at some point been flashed to the tasmota firmware provided by Theo Arends. However, many of them were running a very old version and I wanted to update it for security reasons. This proved to be a fairly simple process once I’d figured it out.

Load the admin page of the device with a web browser. At the bottom of the page it will say what version you are on

I had to flash 5 firmware versions to get up to 8.2, as I was on such an old version, and a direct leap isn’t supported without losing configuration. I just used the built in tool (web interface; firmware upgrade; point to *.bin file. There is an official Wiki with the migration path details that you should refer to for the most up-to-date information. Currently the process is (jump into it based on your current firmware)

If the update goes wrong, you’ll have to reflash the device

I had a couple that didn’t reboot properly during the process. I simply opened them up, connected my CH340g, and used Tasmotizer 1.1 with the final firmware I wanted (at time of writing 8.2). I then had to connect to the device directly via wireless and set my wifi SSID and password (don’t forget to tick the box)

The firmware has greatly improved the ability to create a “custom profile” for different types of devices. I have several which needed different configurations. I provide the details for each below. To create a custom config go to Configuration: Configure Template. I usually select the Sonoff Basic as the starting point, and I give the template an obvious name (e.g. SWA1). Save and the device will restart. Once it has restarted go to Configuration: Configure Module: and then select the newly created template. The device will then reboot again. 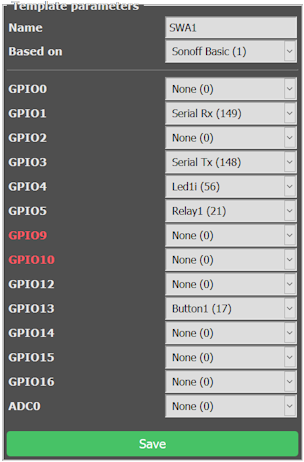 Please send us your thoughts by commenting below! If you would like to subscribe please use the subscribe link on the menu at the top right. You can also share this with your friends by using the social links below. Cheers.